In its beta E3 2001 version, Luigi’s Mansion featured different ghosts than the final version. The 3 main ghosts (Orange, Pink, and Blue) were very different looking than their present day forms. The Orange ghost used to be a pink colored ghost featuring smaller eyes and mouth. The tall and thin pink ghost was once an orange lanky ghost with a huge nose. The blue ghost was originally a purplish colored ghost with smaller eyes and mouth. There was also another ghost that was scrapped from the final. It was colored dark purple, had a similar look to the pink beta ghost, and was only found in the hallways of the Mansion. Of what the ghost did was come up behind Luigi and scream; causing Luigi to yell in fear and fall to the ground. This would cause 50 HP to be drained from Luigi’s health and temporarily shrink his total HP to 50 as well. If the ghost still exists, it would have the same behavior as a ReDead.

In very early screenshots (all being the E3 version), there were shots of a timer in the Game Boy Horror, possibly hinting that the game was either going to have a challenge mode or a time limit, but was scrapped in the final version. It is said that if Luigi did not save Mario within the 24 hours he had, the mansion, along with mario, would vanish. In other builds, the Gameboy Horror also feature a Gameboy Camera-like effect, so it showed everything it could “see”. It is suspected that the Gameboy Horror had at first the time keeping function, and then the Gameboy Camera-like mode, and the onto a different version of the final’s GBH. The near final build had more of a cartoony icon set, while the final build has the more realistic icon set.

Internal Music Names. A few of the internal names in Luigi's Mansion's music archive are rather uniquely named.In particular, the 'Game Over' theme is called GoodNight, the main mansion theme is titled LuigiSings and the music pieces for ghost-catching are titled FishingEvent and FishingZako. GameCube - Luigi's Mansion - The #1 source for video game models on the internet! In its beta E3 2001 version, Luigi’s Mansion featured different ghosts than the final version. The 3 main ghosts (Orange, Pink, and Blue) were very different looking than their present day forms. The Orange ghost used to be a pink colored ghost featuring smaller eyes and mouth. The most interesting part of the PAL version of Luigi’s Mansion is the fact that the Hidden Mansion Mode is much more challenging and has more changes made to it compared to the NTSC-US version, making it the European release a more complete version. Included are both IPS and xDelta patches, so you can choose.

The Poltergust 3000 once featured a “heat meter”, showing of how hot it would get from sucking objects and ghosts up. Its gauge went from a level of 1 to 10. Once it got to 10, the Poltergust 3000 would burst into flames, and cause Luigi to collapse onto the floor, also having Luigi lose some of his HP. On the side note, the Poltergust 3000 was more squarish compared to the final’s version.

Other differences include slight changes in room designs, a beta coin meter, and many other objects. – [info from Wikipedia]

The ending screen would probably unlock to your file a “congratulations” image, or probably just an image for the ending, such as a picture in the wall. Three unused different looking sprites were found by Gabrielwoj, as can see below:

There are few Mario spin-off games that are considered to be classics. Luigi's Mansion is one of them. With its unique ghost hunting mechanics and premise th.

Thanks to SteamingBullet, Matthew Burke and Gabrielwoj for the contribution!

Miyamoto recently spoked about the Nintendo 3DS system, and said that the Nintendo Gamecube was capable of playin stereoscopic 3D video. He said too that they made a compatible version from Luigi’s mansion that with an accessory is able to display in special LCD TVs the game in 3D.

According to a issue in nintendo power,there was going to be a hidden boss ghost that was a generic austrailian hunter guy,and had dialogue that was on the lines of saying he wanted to Kill you and mount your head on the wall. He shot his rifle at you as you ran around the Safari Room.

Please consider supporting The Cutting Room Floor on Patreon. Thanks for all your support!
< Luigi's Mansion (GameCube)

This is a sub-page of Luigi's Mansion (GameCube).

A few of the internal names in Luigi's Mansion's music archive are rather uniquely named. In particular, the 'Game Over' theme is called GoodNight, the main mansion theme is titled LuigiSings and the music pieces for ghost-catching are titled Fishing_Event and Fishing_Zako.

A little drumbeat with an unknown purpose.

A nice little jingle of the Super Mario Bros. Theme. It's called TelesaDemo02 internally. Teresa is what the Boos are called in Japanese, and TelesaDemo01 is the music used when the Boos are released from the trapdoor.

Called Total_Score.c internally. It's just a non-looping version of 'Room_Space.co.' This and the looping version also sound very similar to the sound that plays when you catch all the ghosts to turn the lights on in a room.

Totaka's song played on a piano. Melody would've played it. This can be seen in the internal name, which is PianistQuiz03. The used piano songs are named PianistQuiz01 and PianistQuiz02. '01' is the SMB1 Underwater theme, and '02' is the SMB3 Ground Theme music.

An unused part of the music that plays when you first talk to Chauncey.Part of BabyRoom.bms

Presumably, this was meant for when Spooky bites Luigi and the player is trying to shake the pooch off.The 'ow' noises he makes were reused for when Luigi gets burned in Super Mario 64 DS. This voice clip was later used in a trailer of the 3DS remake, but not in the actual game.

This clip is found only in the Japanese version of the soundbanks.

Luigi shivering. It's only found in the Japanese sound files, and was probably intended to be used in the Cold Storage, as that's the only notably 'cold' area in the game.

Presumably, an alternate sentence for Luigi after all the Boos escaped.

Luigi saying 'Luigi Gotcha'. The final version's clip, Luigi says it with more enthusiasm and doesn't say his name at the beginning. 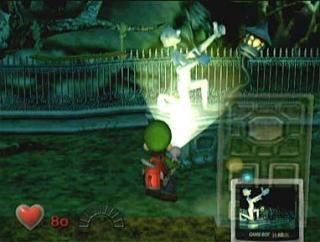 Poor Luigi sounds very out of it. This clip is also only found in the Japanese sound files.

This audio track was most likely going to play after Luigi got damaged by fire.

This was once meant to be Luigi's scream when the famous 'Basher' scared him at the E3 2001 pre-release. 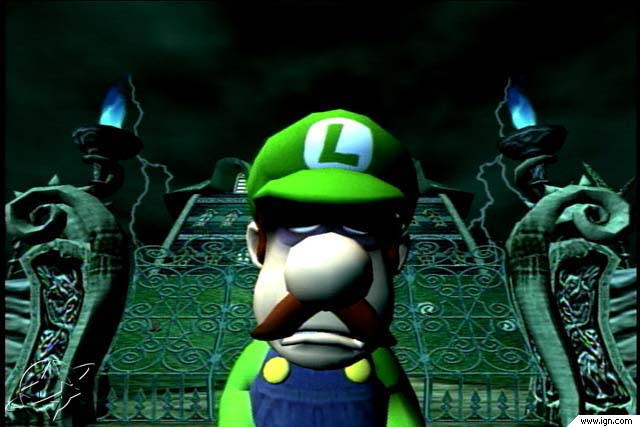 A weird screech of some sort.

The majority of these musical cues are too ambiguous to infer their original purposes. Some are sampled for the game's music.

A low quality version of the sound that plays when you fail a minigame. The used version is higher quality, and available in the sound banks.

The introduction theme for King Boo and Bowser actually lasts for 40 seconds, but gets cutoff at the 34 second mark by the boss theme. It can fully be heard in-game if you pause just as soon as the final boss starts.

The Super Mario Bros. theme played in the conservatory has an unused ending segment that gets cut off by the loop.